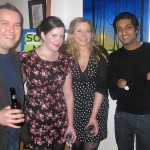 London’s Social Media Week got off to a roaring start on Monday night with a drinks reception at members’ club Adam Street, just off The Strand. Sponsors Meebo kindly bought the beer, wine and snacks and then kept a low profile, which is how everyone likes it.

As far as I know, no-one made a speech, but then I was so late I could have missed it. By the time I arrived people were a bit merry. It was nice to get a bear hug from @jonbains who told me I was a deeply empathetic person, before disappearing to the Adam Street members bar – chances are it’ll be another three years and possibly more children (on his side) before I see him again.

Another blast from the past was @Williamhigham who has also just written a book so we had a cosy chat about how useless publishers are at promoting anything. Then I felt for William so I went onto Amazon and bought his book.

It was good to see lots of other friendly and familiar faces, including @robingrant (above, with friends) @anniemole @freecloud @andrewgerrard @utku @whatleydude @kathryncorrick and of course Mr London Social Media Week himself @toodlepip.

It was also nice to hook up with a smattering of new people. I’ve never met @donaghkebab before but I liked his attitude and his hair (especially the way it matched the art), plus @havefundogood (aka Jack) who was confusingly wearing an @tweetminster t-shirt but confessed to have nothing at all to do with them. He said he wore @tweetminster to get attention, which is weird as @havefundogood sounds more sexy, doesn’t it?

Congrats to the Chinwag crew for organising a fantastic-looking week at incredibly short notice. There’s a whole heap of events: check out the Social Media Week London schedule. There’ll even be a Monkeys Tweetup on Friday with free drinks for early birds – watch this space for more info!