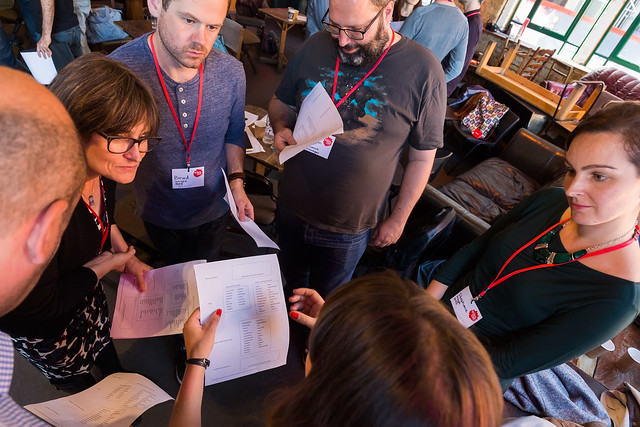 Dare Conference has been going for three years but this is the first year I’ve been able to attend. It seems unique among conferences in that it focuses on collaborative business culture from a digital/ geek standpoint. Founder Jonathan Kahn used to be a web designer, but he grew frustrated at the disconnect between espoused workplace values and the reality – and set up DareConf to bridge that gap.

The first thing about DareConf is that it’s great for networking (in the best sense of the word): getting the chance to connect with like-minded people on a deeper level than you might do at a purely speaker-focused event.

The conference is a mix of presenter-led talks and interactive workshops (like the one above). The excellent talks – where four people (Rifa Thorpe-Tracey, Laura Morgan, Penny Walker and Holly Burns) spoke about overcoming their own problems at work – set the tone for the interactive sessions.

We all ended up having intimate conversations with relative strangers. A bit of it was role play but we also addressed actual problems we were facing with clients, colleagues etc. I came away with some constructive ideas and some new tools to implement them.

Until yesterday, my idea of a safe space was curled up on the sofa, dog at my feet, with a plate of toast and Marmite. Apparently not. A safe space is the first responsibility of facilitators when running a workshop: create a place where everyone can contribute without being judged.

Likewise, Yes, and… is not just an improv comedy technique – it’s a way to hold more constructive meetings.

This is all good stuff – but how about the extra time you need to implement it? Creating safe spaces, along with other trust-building techniques like active listening, all take more time than the “this is just the way we do it” approach. But building relationships takes commitment and, like social media, it’s all about prioritising.

As Instagram’s Holly Burns said in the final talk of the day: “Having less time can make you do more – you prioritise more ruthlessly”.

What really matters to you in the long run?

PS. You can watch the four talks in HD video here.