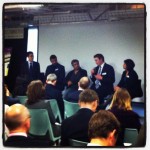 Will: We need to think more about how we can pipe social tech and more about what business will become. When I wrote my book last year a big theme is change velocity: when you look at how Netflix destroyed Blockbuster and how Amazon destroyed Waterstones and Barnes & Nobel. The faster you can orient yourself, the faster you can observe what’s going on, decide what to do, and then act – the better: an approach taken from fighter pilots. We talk about social technologies but it’s like looking at communication purely through words when 90% of communication is through body language.

Barney: The sooner businesses start thinking about the next level of social, where social can take them in terms of recruitment etc, the better.

Tejal: At Nokia, we’re thinking a lot about e-commerce, such as how do we start converting fans into sales. There’s also a big focus on ROI. We have an internal tool called socializer, developed with Dachis, which

incorporates Radian6 technology but also others as well. How much more do we become aware of the conversations that we haven’t been before.

JP: As the social infrastructure rolled out, we began to see a shift: people started sharing what they did. Whenever you start with a new technlology, you’re going to play with it, that’s why we had “this is what I’m having for breakfast” – now people are moving from actual what they’re doing to what they’re intending to do, to intent. It’s the next step: “I am planning to do this/go there/buy this”. If we all agree that the critical mass of people are on social networks, your brand is actually a combination of opinions. If you don’t’ realize that, someone else is going to eat your lunch.

Barney: ROI of social media causes everyone anxiety but in large organisations, conferences etc are accepted: they are baked into the way the business operates. Rather that just try to find that silver bullet and define ROI of social media, look at measuring it in a different way.

Will: The whole ROI thing is bullshit. The ROI question is the biggest barrier to progress. We saw the whole ROI thing with social media marketing a few years ago: we solved it with doing pilots, breaking everything down into smaller channels.

JP: If you’re worrying about ROI, you’re probably in the wrong place.

Will: People are using social media in amazing ways: up north in Leeds, the drivers [in a mini cab firm] are using a Facebook group to swap shifts. The ROI there is a happy accident. Do what you need to do and the ROI will come.

Barney: Collaboration is the end state: there’s a whole lot of other things that need to happen beforehand. Worrying about the tech just gets in the way of what it is you actually need to be doing: the behaviour. The cases where Yammer has been started by just one employee who needs it have been more successful than where it has been introduced by the CTO.

Tejal: Totally agree that cultural change and mindset is the biggest challenge. Build relationships, be social, be human with people, work together. Having a senior partner is good. You can present technologies to people but unless you have the systems, it’s a wasted investment.

JP: Salesforce have got 120,000 customers and 80% of them have converted to Chatter as an internal comms tool. My daughter will not accept her phone has run out of battery as a reason not to participate in BBM. Facebook has done a great thing with social objects: photos. It’s all about the community you’re part of. ROI is almost a hygiene factor. If the artifacts and assets being shared are not valuable, people won’t take part. And it has got to be easy.

Will: The iPad is interesting because so many CEOs have got them: that’s tuned them into all this: they love wielding their Apple stuff to feel hip. I know it’s a cliché but it’s now the middle management that’s the problem. I wonder what we can do in terms of incentives: what can we do with someone who’s carefully built their empire, to get them to share. They are the people who feel they’ve the most to loose.

Question from the floor: where are the biggest pain points? What things that haven’t yet been invented would you like to see in the marketplace?

Barney: Some kind of content management system for shared content: monitoring responses. It probably already exists, but it hasn’t been cracked. Doing that in an open forum, for everybody to see.

Question: Has anyone got any examples of where a real cultural shift has happened?

JP: We’re now seeing individuals who’s perceived self-esteem is dependent on getting feedback. The culture has to be able to take open and honest criticism and this is difficult. Investing in performanc monitoring, being able to say thank you, rewarding, motivating as well as criticism. Start attacking that very culture. And the inertia of middle management, can start to change it. Start investing in tools like that.

Barney: most people want to go to work, do a good job and be respected. We saw this in one workplace where we quickly started to see value being built: people would self-moderate.

Question: it seems like there are separate solutions for individuals and enterprises: eg: Facebook vs Yammer. Do you think we’ll see more of that?

JP: the old CEO mindset of “I will make decisions for the locked down desk top” and all of that has changed. One size does not fit all. The OS you choose influences the devices you have. The workplace has to adjust to the individual making discreet choices. 110 years ago you couldn’t write in a bank’s ledger without using bank issue fountain pens so that the writing looked consistent. The tablets of today are like the pens of 30/40 years ago. but they represent more. Single sign-on is not the enterprise’s right. It is the individual’s right. Enterprises need to cope with federated outcomes.

Question (from Benjamin Ellis): How is business going to resolve the dichotomy between propriety processes that are traditionally so valuable within the organisation and truly social approaches?

Tejal: Generally people are trying to do the best they can when they come into work, you’ve got to allow for that openness within the organisation. Generally we’re talking about things that are highly confidential, but within a safe environment. Human nature is collaborative, it’s also good. You’ve just got to go in and be collaborative. We’ve had no major disasters at Nokia regarding leaks; obviously we try to address that but that’s a separate issue.

Barney: There is this assumption that the old model was probably secure. Ask what do we want to do and how do we do it securely? (as Cisco said) That’s the only way to reconcile this.

JP: one of my favourite quotes is people make shoes not money. People are solving problems. We had Richard Branson interviewed last week and he said people go into business to solve a need, money is an outcome. One way to make money is to create artificail scarcity, now we come to a world where we have abundance of everything. There may not be only one route to making money. The dichotomy has a resolution: there’s only one resolution and that is abundance.

Will: Our IP laws are fit for purpose for the last century, not this one. The next big revolution will come with 3D printing. How the heck are people who make value out of patents going to cope with that onslaught? How does the law catch up with where the world is at?

In which sectors will social have the most impact? Healthcare, Education and Consumer

In what country will social have the most impact? Three of the panel say India.

What percentage of comms will be social in five years time? All of them!

What will be the next significant company to be acquired: Apple to buy Twitter

What will be the next signfificant social tech co to go public? Twitter

If you could invest in one company other than your own what would it be? Any social dating website, Square and stackoverflow.com

What will be the most impactful application of social tech in the next five years: healthcare and reputaiton currency

12:20 Wrap for lunch. I’ll be back here liveblogging at 13:30 BST with “Heroes of Social Innovation”