“I hope that one day you won’t take my job” says the journalist.

Sophia’s comment is slightly threatening, but she follows it up with a super-sweet smile, and everyone laughs. [Watch the video]

That’s the thing about robots these days. They’re awkward, off-kilter, likely to come out with non-sequiturs, unpredictable in a cutesy way – but ultimately programmed to please and make us laugh.

Sophia the Robot is firmly in uncanny valley territory. Her skin is made of a flesh-like, nanotech material. She has cameras for eyes and a microprocessor for a brain. Her advanced AI (artificial intelligence) software enables her to have human-like conversations.

“Are you a person or a robot?” she asks the journalist. It seems like genuine curiosity.

You may know the story of Amazon’s Alexa chuckling to herself. Well, CognitionX was a bit like that. Now in its second year, CognitionX is the Festival of all things AI, Blockchain and Emerging Technologies. The robots were a side-show to the main programme of expert talks and panel debates but as discussions took place about their rights and development, you could almost feel them twitching. 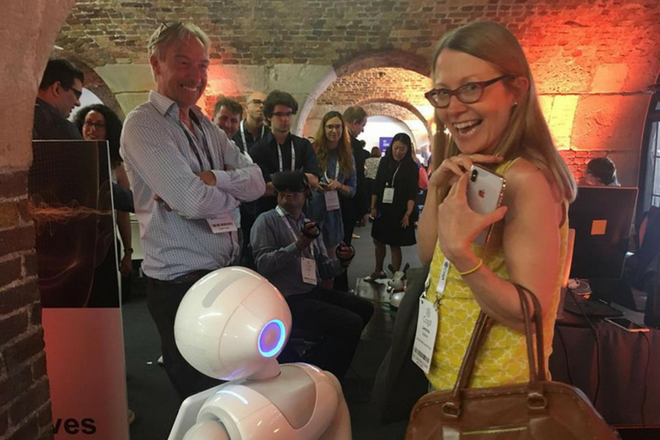 Should robots look like humans? asked one of the more animated panels, not without concern (Daniel Estrada has written a good summary of both sides).

But it’s not just people who are being upstaged. In among humanoids like Sofia there were robot rabbits (who can act as pets to the elderly) and a DogBot (which its inventors claim will soon be able to help pickers carry fruit from the fields). It’s harder to see AI as threatening when you can scratch it behind the ears.

“In terms of communicating what it will be like to live with proper AI, the closest thing we have is animals” says Dr Claire Craig of the Royal Society, “because they’re the only other life-form we’re used to co-existing with”.

Feel the fear – and do it anyway

I met Claire at Keep Calm and Carry On: How to Manage the Fear of AI – a workshop she was running with colleagues from the AI Narratives Project. The project seeks to avoid dystopian or utopian visions of the future and focus instead on responsible communication of AI (we talked about the consequences and immediate associations of headlines like Killer Robots Could Become A Reality Unless a Moral Code is Created for AI). 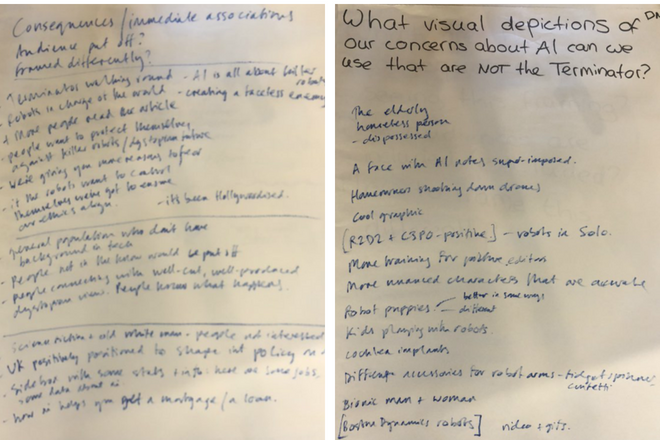 Admittedly, I can see why it’s hard for journalists to resist hyperbole. I heard (and saw) a lot of mind-blowing stuff at CognitionX:

But an important recurring theme was inclusivity. Despite a wealth of corporate sponsors, the opening keynote was Joanna Shields talking about Why AI Matters to Us All. And it was refreshing to hear speakers like Rumman Chowdhury (Accenture) speak in an open way about her work with Responsible AI.

There was an entire stage devoted to ethics, covering topics ranging from The Lords Review: A Magna Carta for the Digital Age to How the AI Community Could Put a Stop to Homelessness. Anthony Grayling argued for an “Antarctic Treaty” for AI and the closing panel addressed The Impact of AI on Mental Health.

When I talk to friends about AI, it seems easy for them to turn away. The most common reaction is that it’s either irrelevant (to them) or dangerous. There seems to be a sense of inevitability that money will lead this and there’s nothing the rest of us can do about it.

But I think they’re wrong. The more we are educated about new technologies, the more we can get involved in their development. That’s why events like CogX are so important. Hats (and robot wigs) off to Tabatha Goldstaub and Charlie Muirhead for putting it on.

2 thoughts on “Robots, the universe and everything – CogX has it all”