It’s nearly ten years ago that I met Tim O’Reilly in New York to talk about Web 2.0 and how it was going to change the world.

So it felt a little like deja vu last week hearing Ryan Shea (above, left) and Melanie Shapiro (right) on stage at CognitionX, championing Web 3.0.

Like its centralised, super-social predecessor, Web 3.0 is going to change everything. But Web 3.0 is decentralised – and we’ll not be sharing our data with anyone (unless we want to).

Web 3.0 will give us self sovereign identity  – a core identity that represents us as individuals and is all bundled up with our own data, which we’ll have complete control over. As opposed to government or corporate issued identities (which are what we have now).

Shea is co-founder of Blockstack, a decentralised network built on Blockchain. “These decentralising technologies can help keep us safe and help keep us free”, promised Shea.

Decentralisation can protect us from the three “digital sins” currently damaging the social web:

“With the right software we can protect ourselves,” said Shea. “Decentralised applications may be the solution to our problems: we can own our own data, there are no central operators to be targeted and we can chose between different versions of software.”

If we want to see how this works in practice, Shea recommended using Graphite instead of Google Docs, or Signal or Stealthy for private messaging,  (Hear Ryan Shea’s talk in full)

Sitting alongside Shea on the Blockchain panel on digital identity, Melanie Shapiro gave a good demonstration of how self sovereign identity works with her biometric ring, Token.

Token represents something of a holy grail for wearable tech. It’s a simple, unified way for people to prove who they are. This means not only can you wear the ring to verify your identity for online banking or social networking (and any other website you may need to log into), you can use it to make payments, get into your gym and even unlock your house.

The Token ring is actually available now although (not surprisingly) you’ll need to join the waiting list.

Shapiro is confidently planning for mass adoption: “you have to become a giant in order to compete with them”.

She added that companies like Google realise that they won’t be able to make as much profit from our data forever.  “For a company to own your data. It’s a liability for them. Their brand is at risk…I don’t think that’s something they want to hold on to”. 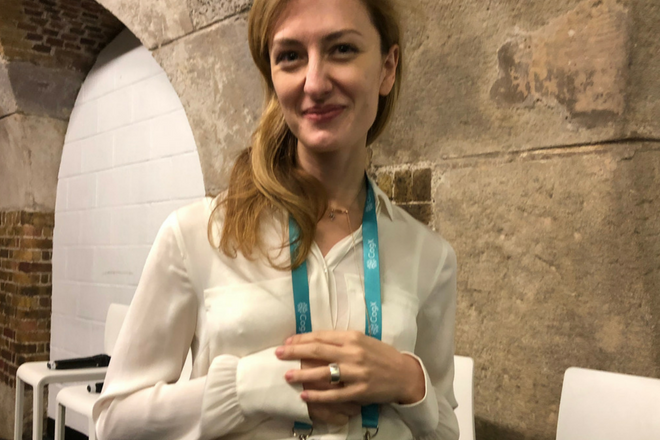 Mel Shapiro with her Token ring – an all-in-one device you can use to unlock everything (keys, credit cards and passwords)

Hearing Shea and Shapiro talk made me remember that Facebook, Google et al aren’t even 20 years old yet. They may have grabbed the land mass of the Web as we know it – but the party is moving on.

It’s hard to imagine a life without today’s big social networks, but already early adopters are putting faith in new apps and technologies like Blockstack and Token.

As the teenagers at CogX put it, “Twitter is  for old people“.

While web 3.0 and wearable data may be the future of social media, chatbots are already here – they are just not (yet) the norm. Messaging has been around for a long time but technology has really taken a leap forward in the past five years, according to CognitionX’s Julian Harris.

100 billion messages are sent globally every day and many of those are generated or received by bots, said Harris. The ability to deal with ambiguity in speech, memory in conversation and emotion are all key. Conversational “chatterbots” like Mitsuku have been quietly raising the bar in what’s possible.

Over at CognitionX’s Lab to Live stage I watched a demo of a new chatbot being launched next month.  Ruby is the latest member of RS Components‘ customer service team. She is treated as a new member of staff: “a very clever intern”. She needs to be trained in how the business runs. She’s able to handle many different types of query, so there’ll no longer be a need for those agonising transfers between departments.

Yes I know, yet another AI called “she”. Apparently that’s what RS Components customers feel most comfortable with.

Ruby has been built for RS Components by Hack and Craft. She is formed from a combination of different technologies (for example, SpaCy for language recognition and Dialogflow to understand context). A key part of Ruby’s functionality is image recognition: customers upload a photo of the item they’re having problems with and Ruby can identify the product.

Harry McCarney, Hack and Craft’s CEO, presented the demo at CogX, along with Paula McKillen of RS Components. Watch the Ruby demo.

On 15 July Ruby will be deployed in the UK for telephone calls and web chat. McKillen hopes to scale Ruby into a multilingual bot so that customer service can be available globally 24 hours a day.

There was no mention of how Ruby will handle queries via social media but I’m sure it’s only a matter of time!