Andy Warhol said that in the future we will all be famous for 15 minutes. George Orwell predicted constant surveillance. Maybe it’s only with hindsight that we see these two things as inextricably linked: our “fame” always comes at a price.

Online social networks offer us free connectivity and the ability to broadcast edited versions of our lives. In exchange, we give them our data. Trouble is, the details of this contract have never been clearly articulated or explained, much less negotiated.

Last week I went to Facebook’s new office in London for a Design Jam. The Design Jams are open innovation – a series of hackathons to help Facebook users better understand, improve and navigate the legal complexities of its website.

Facebook is understandably concerned that it may be losing younger users and that hours spent on the platform are declining. Last week’s event focused on data transparency for young people.

The day kicked off with three interactive sessions on:

In the afternoon, we were split into six different tech “startups”: each one had to identify and explore a specific design challenge. My team looked at how to build a direction-giving app (like CityMapper or Google Maps) for a 15 year old girl who didn’t want data collected about her location or where she lived. 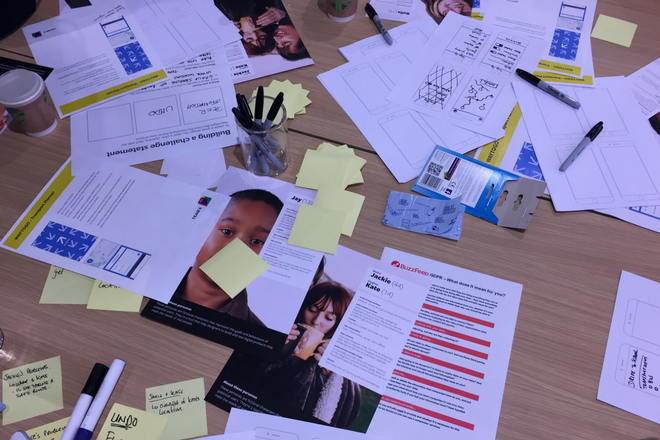 Our table during the afternoon session – working with sticky notes, user personas and wireframes

It’s important that transparency is baked into the user experience of any product. These sessions are fascinating and well-intentioned – but they’re a retro-fit. And Facebook’s not the only social platform that’s guilty.

Harvard academic Shoshana Zuboff has termed it surveillance capitalism: the idea that Orwell’s Big Brother is watching us – in the form of Facebook and other big tech companies. She says “government control is nothing compared to what Google is up to”.

The GDPR (General Data Protection Regulation) adopted by the European Parliament in April 2016 and enforceable from May this year is intended to protect personal data and give control back to European citizens [ it was confirmed in the Queen’s Speech last June that GDPR will be incorporated into UK law post-Brexit – thanks Eva Pascoe for the update].

Ten years ago I interviewed Adriana Lukas and she told me about something called Project VRM. VRM stands for “vendor relationship management” – it’s all about empowering individuals to exert influence. ProjectVRM founder Doc Searles says 2018 is the year when customers will finally take charge: when what he calls the Intention Economy will finally start to happen.

I hope so. I genuinely hope big tech and citizens can work it out. It’s no coincidence Big Brother is coming over all nice and friendly just as he thinks we might show him the door.