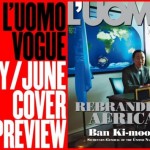 Thanks to Anke Holst for tweeting about Vogue Italia’s May/June issue of L’Uomo Vogue, which is devoted to “Rebranding Africa”.

The whole project looks like a great metaphor for organisations doing “social” badly: by externally “rebranding” Africa, L’Uomo Vogue manages to demean a whole continent while also continuing to assert a kind of outdated colonialism in proposing its own ill-informed solutions to complex issues such as Nigerian economic inequality (build a Rodeo Drive, apparently) and devoting full-page spreads to people like Diezani Alison-Madueke, Nigeria’s oil minister, widely considered to be one of Africa’s most corrupt politicians.

The “Rebranding Africa” issue of L’Uomo Vogue has not surprisingly upset a whole load of people. The irony is that the editors can’t see what all the fuss is about: they are “listening”, right? They are “paying attention”, surely? They are even “engaging” (see the response of Franca Sozzani, Vogue Italia’s editor-in-chief, to a blog comment, below).

Vogue Italia no doubt imagines itself to be raising important issues, not appreciating that its very approach is in itself suffocating and uni-directional (it’s what I like to call the “broadcast paradigm” – this issue of L’Uomo Vogue isn’t actually about Africa at all, it’s about what L’Uomo Vogue thinks about Africa).

On Vogue Italia’s website, one articulate observer, “Rachel”, agreed with the need to challenge the accepted media view of Africa, but disagreed with the way in which L’Uomo Vogue was doing it. As she commentated:

“It is important that people see beyond the famine and death in Africa and see the potential it has to grow but the potential has to be found in communities who are doing what they can to get out of poverty whether it be telecommunications to do banking, solar energy to power their small businesses or community initiatives to support women. What use is a Banana fricking Republic?”

But instead of following what is generally accepted to be universal netiquette in these things (be polite, acknowledge criticism, take argument offline where possible), Sozzani challenges “Rachel” with a defensive tirade, including lines such as: “I’m sorry for you, you don’t love your country and don’t want to help it. I don’t care and I go on my own way and certainly you won’t stop me”.

Hmm. Not exactly an intellectually rigorous argument. But “Rachel” raised a valid point and her comment resonated with one in another blog post I read at the weekend – Matthew Mezey’s review of the latest thinking around Social media, community organising…and ‘collaboration illiteracy’: namely, the best models of social change need to have organisers emerging from within, not appointed externally. Because any outsider will come to the scene with his/her very own preconceptions.

I really don’t intend this blog post to be a particular attack against Italian Vogue, it’s more an illustration, and an observation, of how all of us as individuals (or in groups), to many intents and purposes, inhabit our very own hall of mirrors: we see things the way we want to see them, hear things the way we want to, etc. It is only by proper listening and genuine collaboration that we can break out of that limbo.

Not much of a role for L’Uomo Vogue in the future of Africa, then. On the bright side, the “Rebranding Africa” issue appears to have sparked a debate which is seeing the community’s real leaders come out fighting. Just please, I beg of you, don’t let Franca Sozzani have the last word!

2 thoughts on “L’Uomo Vogue, the broadcast paradigm and why we all live in our very own hall of mirrors”