The UK festival season has kicked in: everyone’s talking about summer and, if you’re that way inclined, you’ll want tickets to your favourite field party. So how are festival organisers making the most of it? I compared ten of the UK’s top independent events on social media, using Brandwatch to track mentions and hashtags.

Unsurprisingly, there’s a healthy conversation around music festivals in April and May (5980 mentions in total), with a strong contribution from mainstream media (led by online local newspapers).

Kendal Calling and Festival No 6 come out top of the comparison, with volume of mentions roughly in proportion with their social media following. Secret Garden Party does less well – despite having nearly the same number of Twitter fans as Kendall Calling (around 50,000), they generate less than half as many mentions. 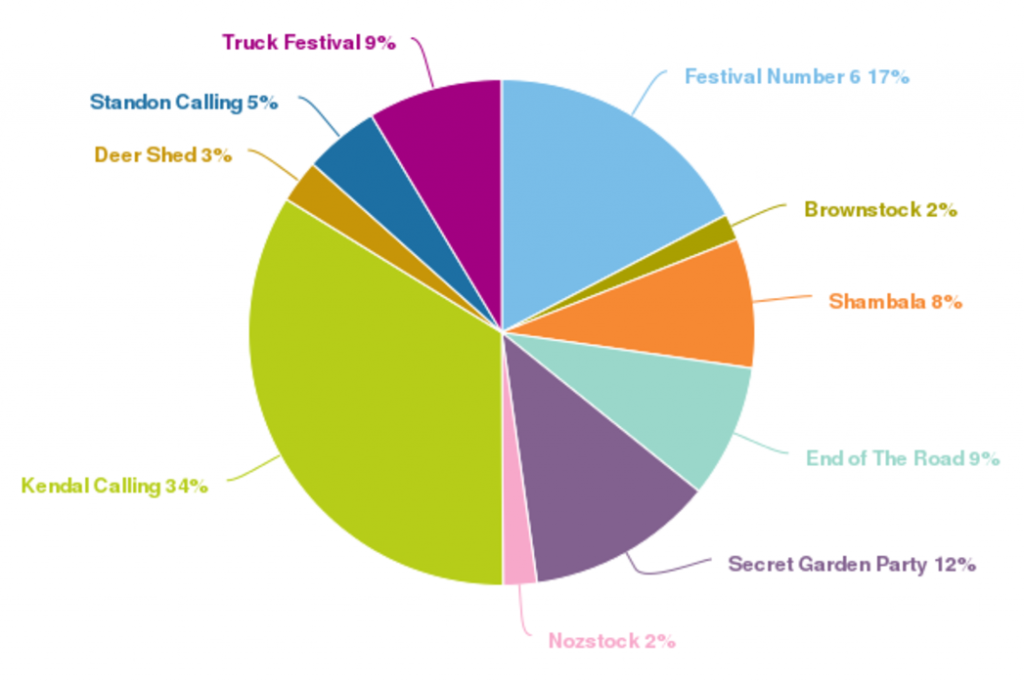 With photogenic people, lush surroundings and celebrity-led entertainment, music festivals should be a social media marketer’s dream. But it takes a bit of knowhow to maximise engagement. Here are five content ideas that caused the biggest spikes in mentions:

1. Line-up announcements – unsurprisingly, these create massive excitement among fans. For festivals with more than one stage, announcements are staggered in the run-up period for maximum impact. Festival no 6’s programme announcement on 27 April led to a massive surge in retweets and mentions. The festival team capitalised on this by using Twitter cards with an embedded link to drive traffic direct to their website.

2. Experiential marketing – host something wacky (like a giant water fight) at a secret location, preferably in London. Secret Garden Party gained some traction with mainstream media by announcing their water fight on 1 May, then gathered more column inches when they were forced to “postpone” it due to bad weather. No doubt they’d have gained a whole lot more coverage had they been able to go ahead with the fight.

It wasn't a dream @SecretGardenHQ are bringing a mass water fight to town https://t.co/HqwqIskqpX pic.twitter.com/wCVD79dYbF

3. Competitions – Kendal Calling gained a whopping 2030 retweets when they launched their “Win Two Tickets” competition on 14 April. End of The Road Festival also gained some traction by announcing the winners of their “Play End of The Road” competition on 4 May. Both events might have done even better with a dedicated #tag.

4. Get a mention in local media – Festival Number 6 had some great free publicity from tourist board Visit Wales’ #FindYourEpic campaign (screenshot at top of this post). Collaboration with local media is a win-win (they get great content, you get PR). And the great thing about social is that you can celebrate not just your own mentions, but those of partners and collaborators (using @names to amplify). Truck Festival upped engagement with fans by tweeting Spring King Band’s late night appearance on 10 May.

Did you see how awesome @springkingband were on @BBCLater? #SUPERAWESOME ! See for yourself here! <3 https://t.co/ZCjE8Ywp67

5. Count down the days – your fans will be as excited as you are. Brownstock Festival announced two months to go on 8 May – and gained 135 interactions. With around 7,000 fans, that’s not a bad engagement rate for the local Essex festival. Sometimes, there’s nothing so good as keeping it simple.

It is officially 2 months until BSTK! Yaaaaaaas this weather is giving us good feelings

This post is one of a series written in collaboration with Brandwatch. For more on how different small businesses are using social media, see #stateofindependents.