I did a 5 minute talk the other day as part of a Show and Tell. The talk was on the Twitter account I’d just re-launched, why I was doing it, and what I hoped to get out of it. After the talk one of the internal communications team came over and asked if he could put some of my slides up on the digital screens around the building.

That was great – a result – some engagement! And someone was actually listening to my talk. But of course I started thinking about how relatively unexciting the slides were and wishing I could put be putting something really eye-catching up on those screens.

It’s increasingly common for businesses and organisations to have display screens in their reception areas, lifts and other high-footfall parts of the building. This internal network (aka digital signage) needs content. And not bland corporate videos or 1984 style maxims either. These screens need something that grabs the attention, engages and entertains.

END_OF_DOCUMENT_TOKEN_TO_BE_REPLACED 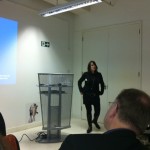 Communities are not just about work: it’s a lot of other things: I’m part of a Man Utd community, a cooking community, gardening…

So, what are the tools, or rather the methods? I don’t like the term social media, it’s not about tools, it’s about being social, a social culture.

First up, I’d like to talk about audio. Often a very forgotten medium. If you’re in a very large corporate, a large chunk of employees will never have met the CEO: audio is a great way to bring the CEO to those employees: eg: audioboo: for example, get the CEO to comment on a new product that’s just been released, record it on your phone and tweet it: great way to communicate internally and externally at same time.

Another example, ipadio: I did a load of interviews with participants in an event and then broadcast them using ipadio; great way to amplify your events.

Video is an absolute no-brainer. You just need a flipcam or iphone. Also these days the Blair Witch type effect is more acceptable: it’s almost a little bit more engaging: more real, more intimate. I’m a big fan of video and do lots of food videos with my brother. At Virgin I did lots of interviewing from the frontline on a flipcam: eg with one of our call centre agents. Good platforms include YouTube, Vimeo, Qik.

Microblogging: Twitter is the obvious one to mention here. I love Twitter. Twitter’s beautiful in lots of ways. When we opened up Twitter at VirginMedia we were previously connecting the unconnectable. We had someone working down in Chichester who started collaborating with someone up in Newcastle. It led to customer service opportunities, collaborating with business leaders on lots of projects, breaking news. It’s a great way for your people to be staying in touch.

People are nervous about ‘letting employees loose’ but if you don’t trust your employees, why do you employ them. There is always Yammer if you prefer to keep stuff behind the firewall.

Social networks: I’ll just look at Facebook and LinkedIn. Brilliant for community building. Great way to generate engagement. Your employees are your biggest advocates. Even Quora is becoming a useful platform – there’s a great internal comms discussion going on there right now.

Andy: is it important to channel people to one or more place?

Abi: my view is that we’re all about coaching, enabling and empowering people to do it themselves. We’re not about directing or telling. Internal comms almost doesn’t need to exist any more because employees do it by themselves.

17.08: Abi: There’s absolutely loads of other tools out there: delicious for example: you might have someone in the company who does a lot of reseearch, reads a lot of articles, you can all go to that guy’s bookmarks and read it though. If you want to look at my bookmarks on social media and internal comms, please do!

Flickr is great for photos; WordPress for blogs. There are all sort of tools that can be used. It’s much more about the principle of your employees going beyond the firewall than the actual tools themselves.

Launching a competition to find bloggers for a specific event (eg: olympics) is a great way of getting employees to start blogging. And bear in mind that your detractors can often become your biggest fans.

Comment: a lot of the time senior management block this stuff because they’re scared of it or they simply don’t understand it – it might be worth taking time just to give them a bit of training.

Abi: yes, I really think IBM are rock stars in terms of this. They are still a trailblazer in using SM internally. Look for John Iwata (IBM exec) video on YouTube: it’s great – covers everything that might bother newbies. Everything, libel, privacy etc will be covered by existing corporate policy.

Something for the future? Gowalla, Facebook places, Foursquare and a load of others. I think location-based stuff is the next massive opportunity: a huge opp to use this internally with your employees.

Re policies and guidelines, I always steal from IBM. Don’t like calling it a policy, much rather guidelines. In my slides I’ve put five key areas.

Asda are also rockstars in this space: look at The Green Room – a great example of transparency. 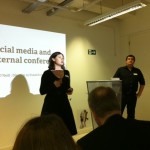 This is someone from Media140 introducing Matt (sorry I will get her name).

15.05: Matt is going to talk about using social tools as part of your internal communications – to organise meetings and conferences.

Third, use a variety of media: people absorb information in different ways.

If you really want to get reach: make it mobile-ready. When senior execs have their dead time, waiting at airport etc, that’s when they’ll interact with this sort of thing.

Promote event by using existing channels, asking delegates to forward links – helps to build traffic and they like being asked, stroke influencers’ egos, ensure email notification with each major update.

Tell people the conference matters: be adamant about objectives. Tell people about workshop activities, again get influencers on board.

15.15: during event you want to report in real time. Some of the key plenaries can be written up in advance if you know what they’re going to say. As you’re putting up new content, take the comments that are coming in and feed them back into the event: eg: reading out tweets that have been made during lunch break. Try to get different viewpoints on what’s been said: create buzz.

Be visible: use LCD screens in break out areas so people can see live content. Make sure roving video/audio team are clearly identifiable.