Facebook has 2.2 billion users. It owns Instagram, WhatsApp and Messenger. Four out of 2017’s most-downloaded iOS apps are owned by Facebook. It’s controversial Open Graph (an API that gave advertisers unfettered access to to user data) was shuttered in 2015 but replaced by the even more powerful Facebook Audience Network.

There’s Facebook Connect, which allows users easy log-in to third party websites. Facebook even has profiles on people who don’t use Facebook. To many people (as has been said many times), Facebook is the Internet.

If this last week has taught us anything, it’s that our data – the data we put into Facebook (and other social networks) has real, tangible value. Corporations and politicians are buying and selling it. And sometimes it gets into the hands of people we don’t particularly like.

How do we make this stop? I don’t know, but I do know it’s not as simple as #deleteFacebook. That seems all too much like putting your fingers in your ears and singing loudly.

END_OF_DOCUMENT_TOKEN_TO_BE_REPLACED 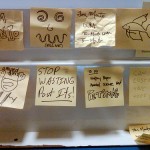 As Nick Carr predicted in The Big Switch, some of our most familiar career paths are being rendered obsolete  by technology: the IT manager is one who may have little more to do than doodle on post-it notes in the office of the future.

Currently, IT managers are powerful gatekeepers. When I was doing the research for Monkeys with Typewriters (and increasingly since), the IT department was all too often cited as a major stumbling block when it came to introducing new, social technologies across the workplace. As one senior civil servant bluntly (and grumpily) put it,

“The IT department’s agenda is to fulfil their aims.  It’s not to support us in our aims.  So if you ask can I do this or not, if I take this route it would be a lot of work for them.  The best route is no work for them at all so they would choose no.  Always choose no.”

But as we know, the walls are coming down. And, once the impact of the digitally-literate generation taken hold, there’s more chance we’ll get the social organisations we strive for.  Smart employers will see this change coming, and embrace it:

“To maximise efficiency among tech savvy workers,” says trend forecaster William Higham, “companies will need to adopt new working practices. Restrictions on personal technology use will need to be reassessed. So too will the current practice of relying on traditional IT departments for input on new technology resources, as knowledge is democratised across departments by the experience of personal use.”

Tom Standage, The Economist’s Digital Editor, makes a similar point when talking specifically about social media: “People who are entering the workforce now think that this is how software works. Some managers talk about Facebook and other [social] networks as being time wasters, but in fact the opposite is true. This is the way that software is increasingly going to look, and that will impact on the way companies are run, because when you have a general discussion about things on a Facebook “wall”, you tend to get much less email and much less wasted time.”

So, time to stop restricting your employees in their use of social media, and start seeing it as a training investment. 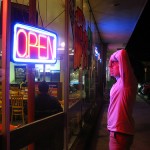 A friend of mine has set up a new business. It’s a modest operation at present and he’s the only employee. Should he create a new Twitter identity specifically for the business or should he switch the direction of his existing personal Twitter account?

My advice: stick to the identity you’ve got. Key reasons:

1. Time. You don’t have time to spare when starting a business. It’s going to take twice as much out of your day to manage two (or more) accounts – coming up with “original content” for second (or even third and fourth) feeds can be taxing 😉

2. If your business identity is closely aligned with your personality and values (as, in this day and age, it should) then you might as well be one and the same account, rather than “pretend” to be two completely separate identities.

3. If you’d like your business account to be along the lines of friendly, irreverent, informal but useful (and you’d be living in the last century if you didn’t), then you might as well keep it as the (hopefully) loveable person you already are, rather than struggling to find an informal “voice” as a non-human entity.

4. Yes, you may well loose some followers if you bang on about your business, but if your followers generally like you and you inject a reasonable amount of humour into things, any you loose will be those of least value to you.

5. If you want to be transparent and open in your business (as we all do, right?), then Tweeting as yourself rather than a third party really makes the most sense. 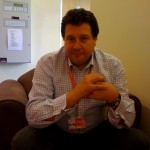 I must admit, I was dreading this day. But possibly not as much as easyJet must dread meeting its disgruntled passengers. Clearly, it avoids this as much as possible. One great way of avoiding contact is to base its headquarters at Luton Airport – let’s face it, tough to get to, and really not a great deal to write home about once you’re there.

Still, that’s what easyJet’s ever-so-friendly customer rep (once I’d finally found the number and then navigated the myriad of automated voices to get through to him) had told me to do. So that’s how I found myself, on an overcast August day, catching the train up to Luton to find easyJet’s offices and sit in reception until somebody managed to bring themselves to see me.

In March this year, I had phoned easyJet customer services to find out why my claim for a refund had been inadvertently “closed”. The claim dated back to January when myself, my boyfriend and our 3 year old daughter had been stranded in Budapest for three nights due to severe weather (snow) in the UK. Due to the complete lack of customer service from easyJet at Budapest Airport, we had sorted out our own accommodation and food, assured by easyJet’s representatives at Budapest Airport (an outsourced customer services company called Menzies) that if we kept all relevant receipts, we’d be entitled to a refund.

According to European legislation, if a flight is cancelled or delayed for any reason, the airline is responsible for feeding and accommodating its customers. Once we got back to the UK, I scanned all our receipts and applied online for a refund of £526.70, which did not seem too excessive considering it covered accommodation and food for three people for three nights (we booked the hotel on Lastminute and ate from cheap cafes and supermarkets).

But instead of a straight reply, I had a flurry of automated emails from easyJet: asking for the same information, asking for further information, asking me to complete a customer services questionnaire etc. The final email told me that “as we have not heard from you…we have changed the status of your question to solved”.

It seemed that easyJet’s strategy was clear: frustrate customers to the point of apathy!

So, back to today, and I had a lot of questions for easyJet, such as:

If so, why be so obtuse and ambigious about it?

Surely the majority of easyJet’s customers are normal, reasonable people, why not be straight with us, rather then lead us to expect full refunds when we aren’t actually entitled?

If easyJet didn’t agree with EU legislation, then why wasn’t it running a public campaign to change it?

Turns out, I was pleasantly surprised: I’d only been waiting forty minutes or so when Paul Simmons (above) – easyJet’s general manager for the UK – came out and introduced himself. He did all the right things: took us off into a quiet corner, offered me a comfy chair and a cup of coffee, listened for 15 minutes or so while I said my piece, looked sympathetic.

Paul’s side of the story is this: While apologising for what had happened and admitting that #uksnow “wasn’t our finest hour”, he said that easyJet had at least learned some lessons. When the #ashcloud descended on Europe in April, easyJet had, apparently, been much better equipped to deal with the delays and cancellations (apparently all the #ashcloud claims are sorted now so if you have one that hasn’t, please let me know and I’ll pass it on).

Paul said that two main things had happened since January:

1. EasyJet appointed Graeme Macleod, former head of ground operations, to lead the customer experience team: this meant that someone who knows exactly how things work on the ground is now in charge of dealing with stranded passengers.

2. It has set up a partnership with international procurement company, BSI. This means that wherever, whenever and however delays occur, easyJet should be able to offer accommodation and meals to customers on the spot. The fact that these are offered through an established, partnership network means that variable costs are controlled.

With regard to easyJet’s refund policy, Paul assured me that the airline wishes to abide by European Law so its strategy is to reimburse customers where necessary. He did admit that easyJet was lobbying behind the scenes in Brussels to change existing legislation.

Actually, I quite agree with easyJet on this because the current legislation is vague and really does, given the current physical and economic climate, seem unfairly draconian towards airlines: I’m not saying airlines shouldn’t be penalised for certain things: environmental damage, for example, but being forced to pay 100 per cent expenses to some customers who are simply having an extended holiday with their families, is quite another.

Finally, Paul assured me that I did, in all probability, have a case for a refund. He’s taken away my receipts, and I’ve got his mobile number. Hopefully I won’t have to call.

Postscript (15/9/10): Within a week of my meeting with Paul, I had a phone call from one of his team; within two weeks a cheque for my full claim arrived in the post. Goes to show that personal contact can work wonders, but a shame that that transparency/ openness couldn’t be replicated across the board and available to all disgruntled customers. I guess a deluge of refund claims creates what you might call a social media “bottleneck”.